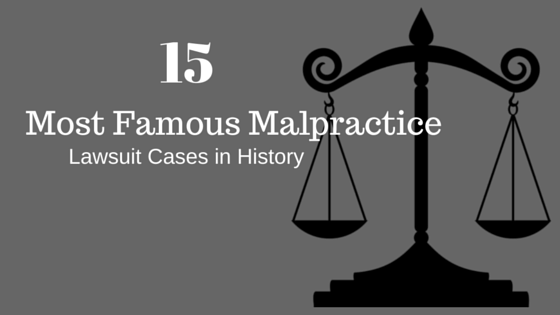 Medical malpractice is the result of a diagnosis, operation, or hospital stay gone terribly wrong. As if going to the doctor’s office or having surgery isn’t stressful enough, some patients can be left disfigured, in pain, or even die due to negligence and general malpractice. Sadly, many of the following famous malpractice lawsuit cases are not at all rare.

While doctors are thought to be among the most intelligent and capable contributors to society, even they have to deal with anxiety and distractions, which means they can make mistakes. Their mistakes just happen to be quite costly, to their patients and their practices. 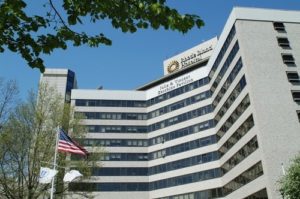 The Rhode Island Hospital actually had three different cases of malpractice occur in the same year—all involving brain surgery. Rhode Island Hospital is known as one of the most prestigious facilities in its state and a teaching hospital for Brown University, however on three separate occasions, some of its attending physicians were incurred malpractice suits for the same reasons.

Each of these medical lawsuits occurred because the wrong side of the brain was operated on, either through negligence or incompetence.

A former Mr. Mexico and runner-up Mr. Universe, Alexander Baez went in for pec implants and came out with c-cup breast implants. Apparently, the man who had performed the procedure, Reinaldo Silvestre, had merely posed as a doctor and had no legitimate medical credentials. Florida police found out that Silvestre had forged his documents and operated on two different patients previously using kitchen utensils.

Five years after Baez came forward, Silvestre was found working in Belize where he is suspected to have operated on hundreds of patients in as little as a one-year period.

Over 1,500 reports are made each year in the United States concerning objects being left inside patients after underground surgery. Of course, these “lost” objects can have a profoundly negative impact on the health of the patients, what makes Mazarei’s case unique is in how the hospital responded to his health claims.

When he complained of agonizing pain repeatedly, the University of Pittsburgh Medical Centre told him it was in his head, and that he needed psychiatric care. Eventually Mazarei received a CT scan, which revealed the 10-inch long pair of retractors left inside his chest. Obviously, the hospital wasn’t too concerned with his claims at first, despite being able to see something physically poking out against his chest.

When this 17-year-old girl needed a heart and double-lung transplant, the professionals at Duke University Hospital were quick to act. Unfortunately, nobody ensured that the organs came from someone with a matching blood type to Jesica.

They operated and transplanted organs from a patient with type A blood into Jesica, who was type O. Recognizing their mistake, the hospital hid these details for 11 days before attempting to find organs from a more suitable donor. Even after the second transplant, Jesica was declared brain dead and removed from life support.

While an operation of this magnitude most certainly carries risks and complications, checking for blood type was one of the most basic, essential tasks that needed to be completed and more than a dozen people seemingly glossed over the mistake.

Kim Tutt was told she had cancer in her jaw, and her doctor said she had three to six months to live. There was a silver lining, however. The doctors told her they might be able to extend that another three months if they removed a large section of her chin and jaw. Wanting to get as much time with her 10- and 12-year-old sons, Kim agreed to the radical surgery.

Later that year after the surgery, her doctors called her in. They told her that the biopsy they had previously performed was likely cross-contaminated, and that she probably never had cancer in the first place. While Kim was cancer free, she was left permanently disfigured as a result of the malpractice.

Many malpractice cases involve doctors operating on the wrong thing, confusing left for right, etc. This kind of error is not an isolated incident, unfortunately, and while most patients are eventually awarded compensation, just as many die from the resulting complications of such botched operations.

Examples include 70-year-old Graham Reeves who died after two different surgeons removed the wrong kidney; Willie King who went into to have an infected leg removed, only to find the wrong leg had been amputated (resulting in both legs being removed); and Benjamin Houghton, an Air Force Veteran who had the wrong testicle removed by doctors.

Lozano had been studying at Harvard when he sought counseling from a Harvard psychiatrist for depression. The doctor, Margaret Bean-Bayog, surmised Lozano had suffered from sexual abuse at the hands of his mother and introduced a “reparenting” technique into their sessions. This involved a simulation of different parts of the lifespan development and required Lozano to treat his doctor as his mother, even being coddled by her and being told they loved each other.

Evidence of sexual misconduct also appeared in the psychiatrist’s notes. Although the Lozano family received compensation, Paul took his life five years after his sessions with Bean-Bayog ended. 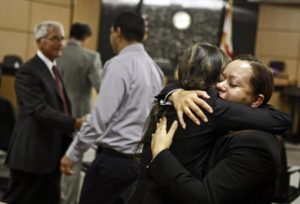 Bryan was born with only a single limb: a leg. While this was not the fault of the Palm Beaches medical staff where he was born, the case was made that the staff had been negligent in detecting such a birth defect. Had Bryan’s parents known about the disability, they said they would have aborted their son.

After being told there was a 99.9% chance that the child would be born without disability or defect—and shown an ultrasound showing all four of Bryan’s limbs intact—they continued with the pregnancy. The family was awarded $4.5 million to give Bryan a better life.

Arturo went into standard back surgery to have titanium rods inserted into his spinal column; however, after opening him up and realizing that there were no rods, his doctor improvised. The attending physician broke the handle off a nearby screwdriver and used the piece of metal to complete the surgery.

Several days later, the screwdriver rod broke and Arturo was forced to endure many more back operations—and intense pain—over the following two years because of the malpractice. Sadly, Arturo eventually passed away due to the complications. 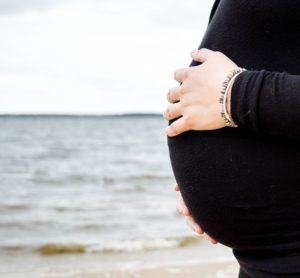 A couple who used in vitro fertilization gave birth to a child with significantly darker skin than either the mother or father. Subsequent DNA tests revealed that the father, who had donated his sperm to the process, was not actually related to the newborn.

The investigation that followed showed that another man’s sperm had been used to inseminate the mother’s egg instead.

Problems with anesthesia are not entirely uncommon, unfortunately, and many people die or suffer complications because of it. Sherman Sizemore underwent surgery and received two types of anesthesia, one of which was not administered correctly.

After sixteen minutes of surgery, the surgical team realized Sherman was still awake. They attempted to give him another dose of anesthesia, along with a drug meant to induce amnesia, however he still experienced almost 30 minutes of surgery—and pain. The doctors never told him what happened, so when Sherman couldn’t remember a specific moment of the incident he knew something was wrong.

Sizemore began suffering from panic, paranoid, insomnia, and nightmares following his surgery; and just a few weeks after, he committed suicide. The connection between his mental struggles and the operation weren’t made by his family until a doctor spoke to them, prompting a more thorough look into Sherman’s medical records.

Andrews developed nodules on her vocal chords in 1997 and was told that surgery followed by six weeks of rest would correct the minor problems she was having.

Unfortunately, the operation caused permanent damage to her voice and she was unable to continue singing, resulting in a malpractice suit.

Dennis and Kimberly Quaid gave birth to twins in November 2007. When they were two weeks old, the newborns developed staph infections. They were kept at the hospital and treated with Heparin; however, instead of being given the normal dose for a newborn, each child received 1,000 times that dosage. 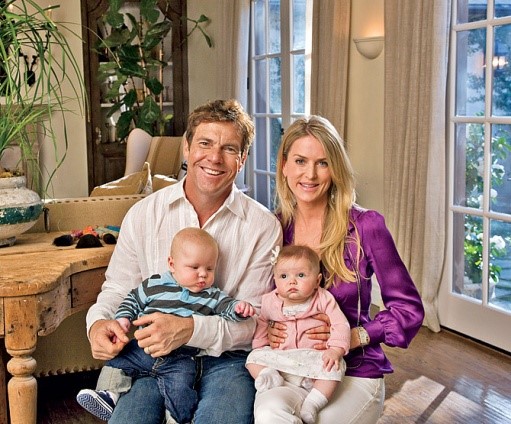 Despite realizing their mistake, the hospital told the Quaids that the children were fine. Meanwhile, the hospital was treating the newborns for the overdose which put them at risk for extreme bleeding. The parents didn’t find out until the following morning when they met with the risk management department. Not only did the hospital make a terrible mistake, they attempted to cover it up and mismanaged their media relations. Thankfully, the children recovered 11 days after.

Carol’s case is another example of patients waking up during procedures, despite the use of anesthesia. Carol was put under so they could remove one of her eyes than had been causing her ongoing, chronic pain. She woke up during the surgery and remained conscious for the duration. While she didn’t feel any of the pain, she suffered from post-traumatic stress following the incident.

One of the most common fears many patients of surgery have is being admitted for the wrong surgery. A 67-year-old woman named Joan Morris (a pseudonym) was admitted for a simple cerebral angiography, involving little more than a special dye and x-ray scans. Once they performed the angiography and returned her to the room, she was brought back to the operating room. 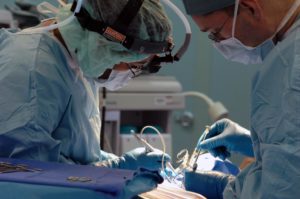 It turned out that she was brought back to the wrong room and as a result, she underwent unnecessary heart surgery. Given her age and the general risks inherent in heart surgery, it could have turned out much worse for the patient who was fortunately pulled out of the surgery before too long and returned to stable condition.

The medical lawsuits described here can happen to anyone, which makes it important to seek the proper legal help when you’ve been the victim of malpractice. Knowing who to turn to and who to trust can be the key to securing adequate compensation for the pain, suffering, and injury experienced at the hands of a physician.